The sublime, the ridiculous, and the historic.

Barcelona somehow recovered from a 4-0 first-leg deficit to pull off a divine 6-1 victory over Paris Saint-Germain and go through to the quarter-finals. No side had ever come from four down in the first leg before; no-one can ever have witnessed a match like this before. 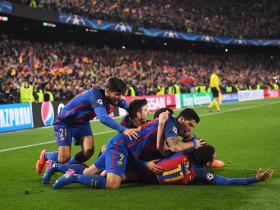 Five things we learned from Barcelona vs PSG

To top it off, the winning goal came in stoppage time, from homegrown Sergi Roberto.

It can’t be forgotten that it also saw one of the greatest collapses the game has ever seen, such was how PSG’s regular moments of chaos contrasted with some of the supreme quality on display, and there will be a lot of controversy about much Barcelona looked to influence the referee.

That will bring justifiable criticism but, on a night like this, it only added to the deep richness of the drama.