Philip Hammond has refused to bow to demands from his own MPs for a U-turn on National Insurance hikes for millions of self-employed workers.

The Chancellor faced down protests from at least ten backbenchers, saying: “No Conservative likes to raise taxes of course – and of course I’m always prepared to listen to and talk to our backbenchers.

“But we have made a decision here, to make the National Insurance system a little bit fairer.” 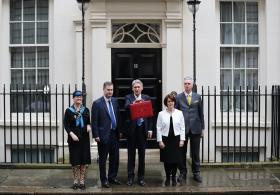 Mr Hammond also sought to shift the argument from claims the increases will hit ‘white van man’ by pointing out “partners in large law firms” were being asked to pay a bit more.

“This is a basic question of fairness to the 85 per cent of the population who work and who get their National Insurance deducted every week from their pay packets,” he told BBC Radio 4's Today programme.

The defiance came despite howls of anger from all sections of the Conservative party and a likely Commons revolt which could yet defeat the measure.

The Budget announcement will see the nine per cent rate of Class 4 NI contributions go up to ten per cent in April 2018 and to 11 per cent a year later.

According to the Treasury, 1.6m self-employed people will pay £240 on average more every year – but no-one earning less than £16,200 will be worse off.

Earlier, Conservative backbencher Anne-Marie Trevelyan become the latest Tory MP to speak out against the change, arguing it was a clear breach of the 2015 party manifesto.

Ms Trevelyan suggested a revolt was already being planned, by bringing forward an amendment to the Finance Bill to strike out the increases.